News from the NAMA Support Projects: Implementation of the Mexican Housing NAMA — Visit of the Environmental Committee of the German Bundestag to Mexico 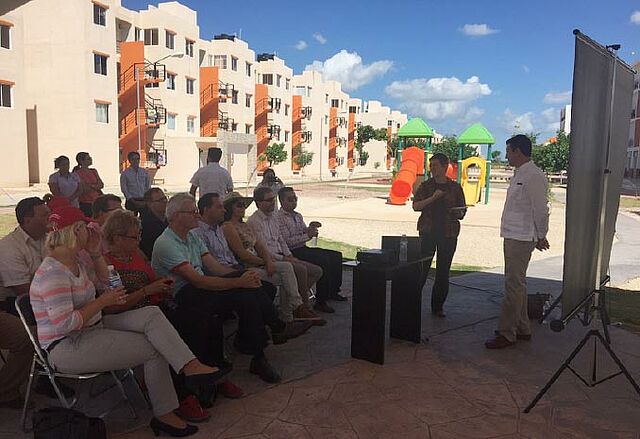 Between the 8th and the 15th of October 2016 representatives of the Committee for Environment, Nature Conservation, Building and Nuclear Safety (German BMUB) visited the NAMA Support Project in Mexico.

Mexico City. Within the framework of the cooperation of the German Federal Government with Mexico on environmental protection and climate change issues, the members of parliament visited different Mexican government representatives and cooperation projects on climate protection, sustainable energy, biodiversity and sustainable urban and housing development.

The delegation of six parliamentarians showed, amongst others, a particular interest in the Mexican policy on sustainable urban development and energy efficient housing. During a meeting with the deputy minister of the Mexican Ministry of Agrarian, Territorial and Urban Development (SEDATU), Juan Carlos Lastiri Quirós, the delegation became familiar with the current challenges of Mexico’s new urban policy. Later, the German Embassy invited the parliamentarians and representatives of the main Mexican housing financiers CONAVI, INFONAVIT and SHF to an exchange on the current Housing NAMA implementation activities.

On Thursday, 13 of October the members of parliament visited the sustainable new housing development “San Marcos” in the Merida, the capital and largest city of the Mexican state of Yucatan. Currently, within the Technical Component of the Mexican NAMA Support Project, the Mexican Housing Commission (CONAVI), the Housing Institute of the State of Yucatan (IVEY), the German Development Cooperation GIZ and the private housing developer VIVO are jointly preparing a Housing NAMA pilot project in “San Marcos” for about 40 housing units with energy efficiency measures based on the NAMA concept. After a walk through the housing development and a presentation of the project, the delegation had a lively discussion with private housing developer, the city mayor and representatives from the German Embassy and GIZ. The pilot project is scheduled to be implemented by summer 2017. The applied measures of the project will then be monitored, evaluated and provide important inputs for the technical operation rules of the housing programmes at national level.